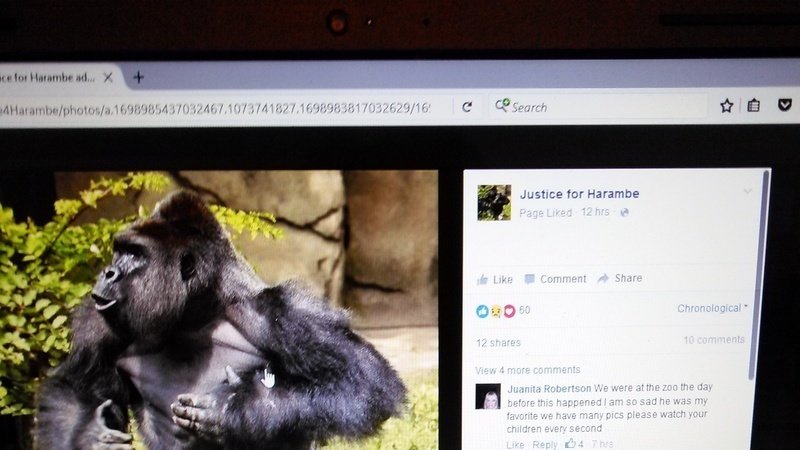 A sad incident at the Cincinnati Zoo has prompted this petition.On May 28, 2016 an unattended four year-old boy was able to crawl through a series of barriers at the Gorilla World enclosure. The child fell an estimated 10 to 12 feet into the moat surrounding the habitat. The 17 year-old male Western Lowland Gorilla named Harambe then got a hold of the boy. The gorilla was perceived as dragging and throwing the boy. The zoo made the last-resort decision to shoot Harambe because of the increased risk of aggression if a tranquilizer was used in such close proximity to a human. This heartbreaking decision was made in the best interests of keeping the child and the public safe.This beautiful gorilla lost his life because the boy’s parents did not keep a closer watch on the child. We the undersigned believe that the child would not have been able to enter the enclosure under proper parental supervision. Witnesses claim that they heard the child state that he wished to go into the enclosure and was actively trying to breach the barriers. This should have prompted the parents to immediately remove the child from the vicinity. It is believed that the situation was caused by parental negligence and the zoo is not responsible for the child’s injuries and possible trauma.We the undersigned want the parents to be held accountable for the lack of supervision and negligence that caused Harambe to lose his life. We the undersigned feel the child’s safety is paramount in this situation. We believe that this negligence may be reflective of the child’s home situation. We the undersigned actively encourage an investigation of the child’s home environment in the interests of protecting the child and his siblings from further incidents of parental negligence that may result in serious bodily harm or even death.Please sign this petition to encourage the Cincinnati Zoo, Hamilton County Child Protection Services, and Cincinnati Police Department hold the parents responsible.