Help the anti-bullfighting movement of Portugal in the fight against bullfighting.
Start by not visiting the country where this practice still exists, in the 21st century plan.
Help us to get the ABOLITION of this show CRUEL.
Make your voices heard against bullfighting in Portugal, in your countries.
For the bulls and the horses, please help us!

The cult of Barbarism

“Is a gang of motherfuckers organised at an international level, which moves a lot of bloody money. And has links and representatives in Parliament and in the Government. Are an organization that bending the laws of Justice in certain parts of the country, managed and followed behind, with features in common, such as bestiality, greed, meanness, the concealment, theft, corruption, narrow-mindedness, among others”

Morrissey has always used his music as a way to express his beliefs – and this week, he continues the trend, with the release of a stirring new song, “The Bullfighter Dies”, to coincide with the annual Running of the Bulls in Pamplona.

In a sneak peak from a blog post written by the compassionate star, which will be posted in full later this month by PETA US, Morrissey says of bullfighting:

The contest is not equal, the animal is unable to protest or to walk away, and the bullfighter doesn’t even actually fight the bull at all! Whatever the results, whatever the motive, the bullfight is systematic torture, and the disgrace of it falls back on any society that allows it to continue.

He also explained the message of the song, which you can listen to here:

“The Bullfighter Dies” is a shout out for the total abolition of the living horror of bullfighting, and since those who control such barbarity have no interest in the welfare of the bull, then we can only approach the subject by stressing how the overwhelming majority do not have any sympathy when the bullfight does not go the bullfighters’ way. Why should we?

Moz is definitely not alone in being appalled by what happens in the bullring. This weekend, activists from all around the world will join PETA in Pamplona for an attention-grabbing protest against the barbaric San Fermín festival, in which bulls are chased through the streets by tourists before eventually being stabbed to death in the bullfighting arena. According to a recent survey, 76 per cent of Spanish people have no interest in bullfighting, and the dying industry is largely being propped up by tourists and huge EU subsidies.

Morrissey has a long and impressive history of speaking out for animals and has been joining forces with PETA and our international affiliates for more than 30 years. Later this month, he will be teaming up with PETA US to give fans the first listen of his much-anticipated 10th album, World Peace Is None of Your Business! Visit PETA.org on 15 July to tune in to the exclusive live stream. 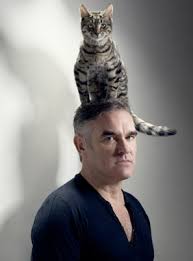